Something to Look At

Home  /  Something to Look At

Something to Look At

Composition is the construct of what makes an image, that is the easy bit, but what makes and image poor, good, great or outstanding. The answer to that rests as much with the viewer as the photographer.
Numerous articles have been written regarding vanishing points, the rule of thirds, golden triangle and the golden spiral, in particular the latter as the ultimate image framing tool. I suggest you take what you want from these, but do not get too hung up on them or consider that they always form the solution to a great image. Like everything photographic there is much more.
Whatever the subject of an intended photographic image, look at the overall detail and then the fine elements of the subject. The key aspect is what any photographer is seeking to portray from the resultant image. In portraiture it is important to study a persons mannerisms and characteristics, for wildlife and the natural world, much is the same although movement, habitat, habits and action can be key. Landscapes offer so much where spectacular scenery can become extremely dramatic under a whole host of weather conditions and differing seasons of the year. Cityscapes add a myriad of opportunity, from the day and nightlife to light effects, light trails from vehicles, reflections, contrasting angular forms of buildings or simply a record of the historic heritage. The variety of subject matter for a photographer is absolutely endless.
A key composition consideration and suggestion is to use all of the viewfinder frame, forget sticking the subject of the image in the centre of the frame. A simple tool is to activate the camera viewfinder grid system, there are normally several forms but the simple 'thirds' is ideal. It helps get away from 'centre' 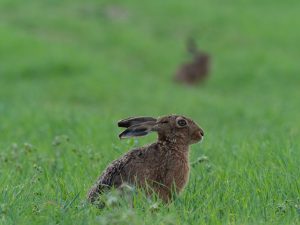 With the two Brown Hares sitting in very similar positions I wanted the detail of the nearest, but both in the frame. I would like to have panned the camera to the right, but the hare was so close it was picking up the sound of my breathing - lowered right ear. The slightest movement and it would have hared off! 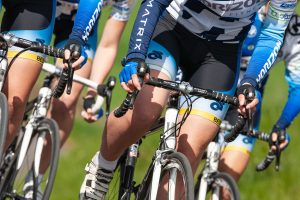 The cycling image was taken on a PR shoot for the team, I wanted something which inferred movement and the essence of a team peloton, but without blur - as required in the brief. Colours, depth of field and the angle naturally moves the eye from top left corner to bottom right. The western culture reads from left to right, whereas the eastern is general right to left. 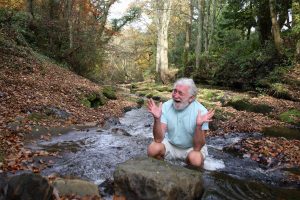 I had so much fun photographing the late David Bellamy OBE, this was one of several occasions. He is in the upper reaches of the river Tyne at the back of his house, we had already shot numerous images, when he suddenly said "I know what we will do - how is this", the next minute he was in the water! Bellamy was Patron and avid promoter of the plastic recycling group Recoup...in 1998. This is a scan from an old transparency - film! 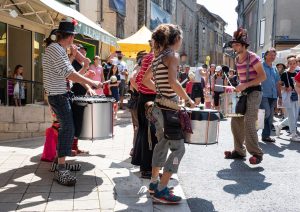 Not only had the drummers caught a lot of attention, but I wanted a visual vibrancy from the image; from the little girls in the shop on the left to the drummers and people walking by. I kneeled down for this image where my eye line was captured by the leader - top hat, whose eye line was to that of the girl nearest the camera.
It is very easy to talk about compositional rules and vanishing points, but it really comes down to what the photographer wants from an image or set of images. Colour, movement, position of the light, height, angle of view, type of lens from fixed focal length to zoom, prime telephoto to extreme wide angle, all these affect the final image capture.
Just remember, there are more positions to frame a subject other than in the centre, be bold move things around and compose at will.