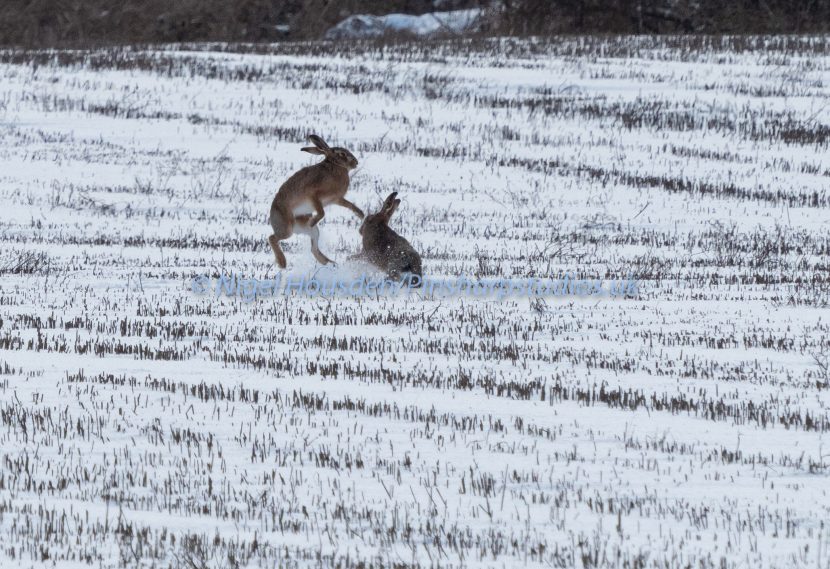 Earlier this month I went out to photograph hares during a day of high wind driven wet snow, without any great expectation in soggy, cold conditions. Impervious to the weather, the animals were running and tearing around in all directions, beyond any hope of capturing good images.  I have just returned from a morning of frozen ground, clear blue skies and sub-zero temperatures after a savage overnight frost. For an hour or more, not one animal was visible; yet somehow several materialised in the middle of an arable field, as if from thin air. It is no wonder that shapeshifters take the form of the Brown Hare. Our fastest land mammal, capable of speeds up to 45mph is as much an animal of myth as it is of substance.

The Brown Hare is considered to have been introduced to this country during the Iron Age, possibly from the Netherlands; by contrast the Irish Hare is a sub species of the Mountain or Blue Hare; carbon dating indicating that the Irish Hare was present in Ireland as far back as the last ice age. In England, Wales and Scotland, brown hares are generally found on lowland, their  lifespan is 3-4 years, breeding takes place between March and July and females are capable of three litters a year — the young known as leverets for up to their first year. Hares do not burrow, but create small depressions in the ground known as forms, their bulging eyes afford 360° vision; enabling them to detect a predator approaching from any angle. The brown hare is easy to distinguish from the rabbit, the former having longer ears with dark to black tips. The medical condition — cleft lip was often referred to as harelip, from the physical structure of the hare's lip.

Contrary to what some wildlife organisations and conservation bodies state, the brown hare does not feed simply at night, but throughout the day as well, as anyone who has taken time to observe their habits, will confirm.

In Celtic mythology and folklore, the hare was shrouded in mystery with links to the supernatural Otherworld. This Otherworld community was accessed through swirling mists, burial chambers and ancient sites, lakes, hills and cairns. Ancient people found the hare so mysterious it was considered an hermaphrodite — male one month, female the next! It is associated with the moon, moon-struck and lunacy, to be as mad as a March hare.

Traditionally and historically the Easter bunny was a hare. The hare was sacred to the Pagan goddess Eostra or Ostara, (Eostramonath  is Anglo-Saxon for April). The Christian Easter is named after the Pagan Eostra where the date of Easter is determined by the phase of the moon. Easter Sunday is the first Sunday after the Paschal full moon. In historic association the moon, which dies every morning and is resurrected every evening, represents the rebirth of nature especially in Springtime.

Both the moon and the hare were believed to die daily in order to be reborn, thus the Hare is a symbol of immortality.  It is also a major symbol for fertility and abundance. Aristotle first suggested that the hare was capable of conceiving whilst pregnant, an amazing and wonderful fact scientifically proven in 2010. Over the centuries the symbol of the hare at Ostara has become the Easter Bunny (Rabbit) who brings eggs to children on Easter Sunday morning, the Christian day of rebirth and resurrection.

← Quick Editing in Lightroom Before the Start →