Several friends have mentioned that they have seen Privet Hawk Moths this year, up until today I had only had sight of their camera phone images. Going into the greenhouse this morning, I heard what I thought was a butterfly, either trapped in a spiders web or unable to struggle free from my mess of pots.

As I moved towards the sound, I was amazed to find two Privet Hawk Moths flapping their wings and trying to escape from the lower level of a pot stack. I can only imagine that they had just emerged from their pupa state, which normally occurs in June and July. 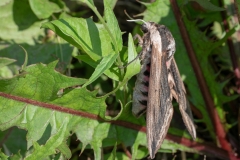 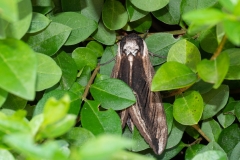 Th Privet Hawk Moth is the largest resident moth to be found in the British Isles, it flies at night and is attracted to highly-scented flowers which provide it with a source of nectar.

← Animal Encounters Travelling Around in Norfolk →